1429 Uncharted Seas is an online slot game. It features a five reel, twenty pay line system, with the betting amount allowed to be changed between spins. Note, however, that play lines may not be adjusted, and all twenty lines are automatically played on. This lack of choice for the player is disappointing, but the visual design and style are where this game really shines, helping it stand apart from others for the sheer amount of effort that has gone into making the game a feast for the eyes. The game is designed to represent the charts of a sea captain from times long past, with all symbols and graphics designed to represent the style of the era.

Each symbol is lovingly created to appear as hand drawn mysterious sea monsters, or map symbols, and the result is charming to say the least. The sound design, punctuated by the lapping of ocean against a ship’s flanks, is equally well realised, making 1429 Uncharted Seas an outstanding slot game that deserves to be played, simply to appreciate the obvious passion of the developers.

The symbols of the game are either sea monsters or map symbols, with the monsters having the greatest value. The mermaid symbol, her calm face strangely alluring, is the most valuable in the game, paying out a good amount if matched the maximum of five times, or minimum of three times. The blue compass symbols are the least valuable in the game, along with the sun and moon symbols, which all offer only minor payouts, even if matching five times.

Some of the other symbols include a giant squid, and a terrifying giant lobster, who seems to be crushing an unlucky sailor in his enormous pincers. To really strike it lucky, however, and rake in cash in 1429 Uncharted Seas, the player must pay attention to the two bonus symbols; the ship and the compass. 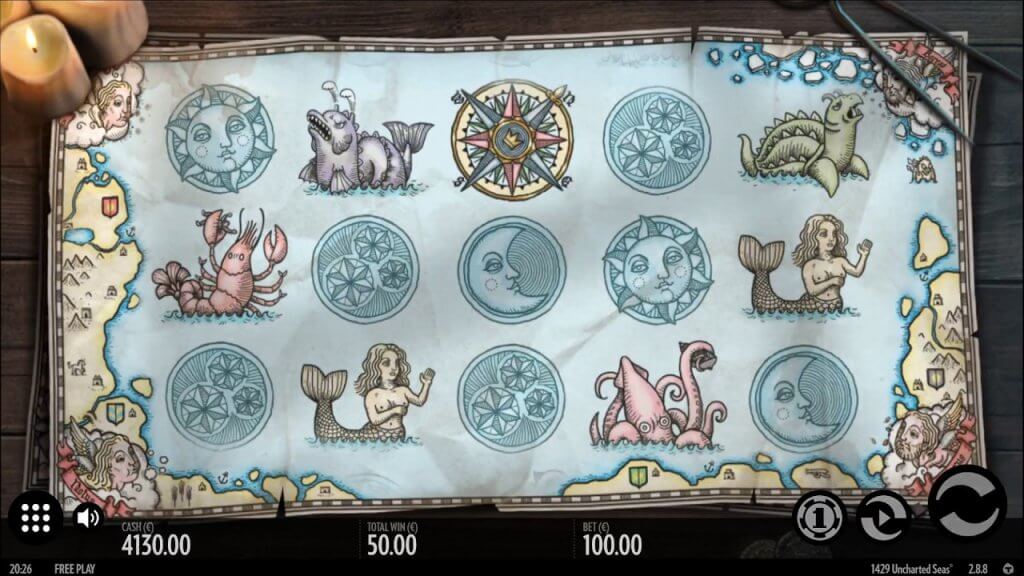 The wild symbol in the 1429 Uncharted Seas slot game is represented by a ship. It will match with all other symbols to create matching sequences, even where a match was previously impossible with standard symbols. The first thing to note about the wild symbol is that it is expanding, meaning that it will always occupy one whole row of the play area when triggering. This, of course, allows for multiple matches to be created, which is always a welcome treat on the wallet.

The second thing to note is the delightful animation that plays when the wild symbol triggers. It involves a vicious sea serpent rising from the ocean and lifting the ship out of the water. There is also a scatter symbol in the game, which can be recognised by its design as a compass.  This symbol will grant free spins if matched, with the more spins granted the higher match value. A match of three will grant ten spins, a match of four twenty spins, and a match of five an enormous fifty spins. If won, free spins will play out automatically at https://onlinecasinogamesca.com/spin-casino/.